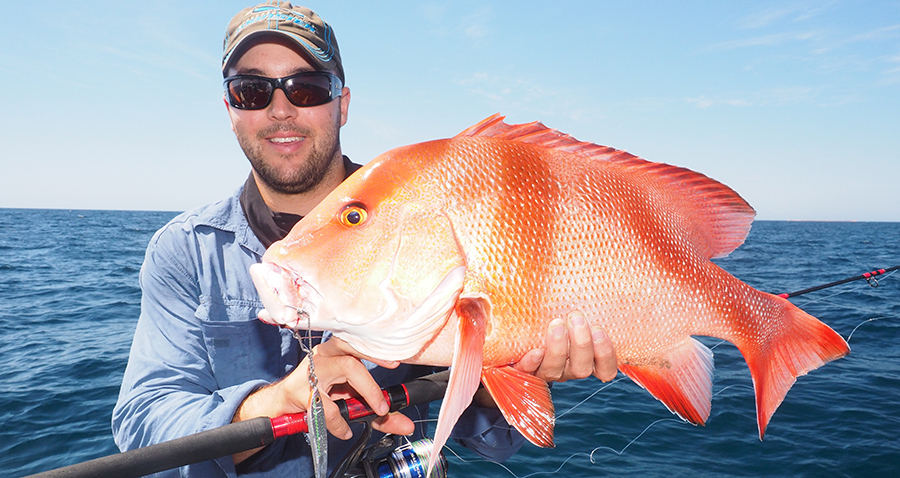 The Montebello Islands are a remote group situated in the Pilbara region off the W.A coast, to simply venture out and explore the islands takes a lot of planning. Being able to launch the boat without drama can even be a mission in itself as there is a tidal river crossing that has to be made in the car prior to getting to the launching spot. A gap in the mangroves and a steep bank is all that is available for launching a vessel.

The Montebello’s offer world class fishing in a totally remote location, in good weather it is a two hour drive just to get to the islands. Once we arrived it was time to set up camp and prepare the fishing gear, which took some time in itself.

We had planned to fish the lead up to the full moon with spring tides, by the time we were ready to leave there would be up to four meters of tidal movement.

There was a high tide around 4pm the day we arrived, I used the Simrad to navigate out in search of GT’s along the back of the reef, the weather was glass with schools of mixed species busting up all around the area.

We have fished the Monte’s a few times prior to this trip, mainly fishing the southern area however we had set up camp in the northern section of the group hoping to explore some new ground. It wasn’t long until we found ourselves tight on some good fish with two nice GT under our belt for the first arvo.
Looking on the charts prior to departing we had wanted to venture out to a location way north of the group, almost 40nm away. A seamount called Rankin Bank. I had heard stories from people who made the trip out there and had some fantastic fishing.

We departed early from camp arriving around 9am, about two miles from the centre of the bank and my Simrad unit was going into overdrive. I couldn’t believe the readings I was getting, it was so hard not to stop at every lump that came up on the sounder. By about midday I reckon I had come close to losing almost half the jigs in my bag, getting reefed by big fish on light tackle.

The amount of fish species we were catching was insane, from Red Bass, Coronation trout, Bluefin Trevally and I even managed to land a nice Wahoo on the jig. My GPS is now loaded with plenty of spots for the next time I venture out there.

Over the course of the next 5 days the weather was treating us well but the water had started to change and the green water was closing in. It quickly shut the top water fishing down forcing us to spend more time jigging. The jig fishing was exceptional with Rankin cod and Coral Trout galore.

Due to the water conditions we made the call to pack up camp and head south to Exmouth to explore some of the islands out there. Arriving at Long island the water was a lot clearer then at the Montebello’s which a good sign was.

By this time the tides were in full swing, although less meterage in water movement there was still relatively large tides. The fishing was really good with plenty of GT landed, we also hooked and lost some good fish in shallow water. Fishing certain points and large bommies around the surrounding islands with small stick baits resulted in plenty of hook-ups from shark mackerel and various trevally species.

We spent a couple of hours each day jigging and as like at the Montes the bottom fishing was exceptional. I marked a heap of lumps that had a good showing of fish and bait. Marking fish on the Simrad is just too easy and I now have way too many spots to fish the next time I head up.

The last two days we decided to head out in search of billfish, our timing was perfect with the juvenile black Marlin fishery beginning to fire as we rocked up. Over the two days fishing I took full advantage of the autopilot system while we ran two rods on the outriggers and two teasers out of each corner. The bite was great, in two days trolling lures we managed to raise 12 fish, hook 10 and land 4 ranging up to 50kg. If we had more appropriate tackle for the smaller fish we would have landed even more but it was great to see the fish come up.

Northern W.A truly is spectacular, we had a fantastic trip and we are already frothing to get back up there!